DOC missing out on millions under National

The Green Party challenged the Conservation Minister in the House today to accept that, when adjusted for inflation, Vote Conservation had been cut by $424 million over the last eight years.

“DOC has received, on average, $53 million less per year under National than it did in the last year of the last Labour-led Government,” said Green Party Co-leader James Shaw.

“The National Government likes to spin the line that it’s spending more on conservation than ever before, but in real terms DOC’s funding has been cut.

“DOC has had to lay off rangers as a result of funding cuts pushing 142 species closer to extinction.

“National's spin won't save the kea, the Antipodes wandering albatross, or the Flesh-footed shearwater – all of which have moved closer to extinction under this Government’s watch.

“New Zealanders want DOC to have the resources to protect our unique native species, and to maintain the national parks, tracks, and huts that we love.

“National’s budget cuts are putting this all at risk," said Mr Shaw. 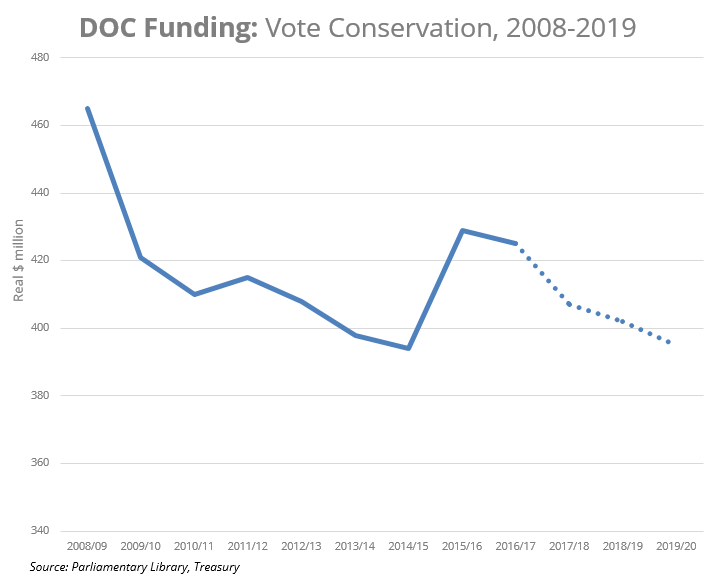 Phase out PKE as part of climate plan

The Green Party is calling on the Minister of Agriculture, Damien O’Connor to phase out the use of the Palm Kernel Expeller (PKE) on farms to help ...
Read More

Govt must start phase out of synthetic nitrogen fertiliser

Responding to new research showing the link between cancer and nitrates in drinking water, the Green Party is calling on the Government to immediat...
Read More

The Green Party is calling on people to go dotty for dotterel and vote for the New Zealand Dotterel/Tūturiwhatu as Bird of the Year 2021.
Read More

No new mines: It’s time to uphold your promise

The Green Party has launched a campaign calling on the Minister for Conservation, Kiritapu Allan and Minister for Energy, Megan Woods to fulfil a p...
Read More

The Green Party is calling on people to go dotty for dotterel and vote for the New Zealand Dotterel/Tūturiwhatu as Bird of the Year 2021.
Read More

The Green Party is urging the Government to stick with its 2017 commitment to no new mines on public conservation land, as the Government speeds up...
Read More