The Government needs to pick up the pace on cleaning up toxic sites, following new analysis that shows its Contaminated Sites Remediation Fund has been underspent almost every year since it was established, the Green Party said.

The funding analysis comes after a RadioNZ investigation highlighted the slow pace of toxic site clean-up.

“The Government talks the talk on cleaning up toxic contamination, but if it’s not spending the money it says it will on actually cleaning up the sites, then it’s not walking the walk,” said Green Party MP Catherine Delahunty.

“These sites are contaminated with dangerous chemicals and mining by-products, and are being left to fester while they’re potentially very hazardous to peoples’ health.

“The dioxins that some of these sites are contaminated with could cause reproductive and developmental problems, damage peoples’ immune systems, interfere with their hormones, and cause cancer.

“Every year except 2012, the Government has underspent the original funding allocation for the Contaminated Sites Remediation Fund, according to analysis by the Parliamentary Library.

“It looks like National is really dragging the chain and at the current rate, many toxic sites won’t be cleaned up until 2030.

“Meanwhile, contaminated sites pose serious environmental risks for our waterways and the fish that live in them, our land, and our communities.

“It’s a shame that the momentum on toxic site clean-up that the Greens created though our Memorandum of Understanding with National has been lost.

“National’s hands-off approach means too many toxic sites are being ignored – some of them in our largest cities, like the Onehunga aquifer in Auckland and the former Miramar Gasworks in Wellington,” said Ms Delahunty. 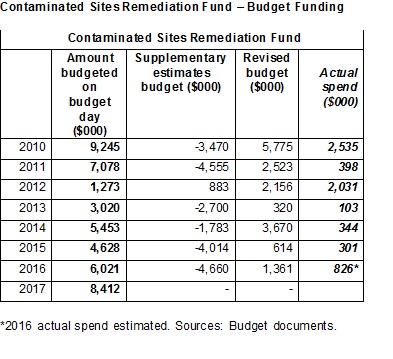 The opposition’s dangerous plan to scrap rules to improve the health of rivers and lakes around Aotearoa highlights the importance of having a stro...
Read More

From the maunga to moana, water is a taonga which must be protected, but too many rivers, lakes, and wetlands have been polluted over the years, an...
Read More

Strongest ever water reforms mean swimmable rivers within a generation

The Green Party says major freshwater reforms announced today provide the strongest ever protections of our waterways, to help ensure the next gene...
Read More

Flood of support for Top of the South catchment

Work to look after nature and restore freshwater quality in Te Hoiere/Pelorus River catchment is getting a significant boost, thanks to new Governm...
Read More