The number of jobs in the screen industry continues to decline despite National’s promise that its backroom deals with Warner Bros would secure more jobs here, the Green Party said today.

Statistics New Zealand released annual data from its Screen Industry Survey today showing that the number of jobs in the industry has declined since a high in 2009 of 30,600 jobs to 25,400 in 2014, the latest year data exists for. This is the lowest level since records were started in 2005. The National Government promised an additional 3,000 jobs in 2010 when it made controversial changes to labour laws for Warner Bros and paid $95 million in subsidies and grants for the Hobbit films to be made here.

“Key promised 3,000 new jobs in 2010 when he weakened New Zealand’s labour laws and gave Warner Bros $95 million in grants and subsidies to secure the filming of the Hobbit here.

“Since this time, the screen industry has shed 3,400 jobs.

“Increasingly, the evidence is showing that National’s style of economic management is good for large offshore corporations but is not delivering for everyday people.

“I expect Steven Joyce will come out later today promising thousands more jobs in the future — little joy for those now out of work and the businesses, in Wellington especially, who have seen their film production revenues decline by 55 percent last year.

“Securing the filming of the Hobbit in New Zealand had positive benefits for our tourism and export sectors, but it hasn’t helped boost long-term employment in the screen industry, as the Prime Minister promised.

“You have to question the value of National’s behind-the-scenes deals with large multi-national companies like Warner Bros, Sky City, and Rio Tinto,” said Mr Shaw.

Chart of jobs in the screen industry, Statistics NZ, 2016: 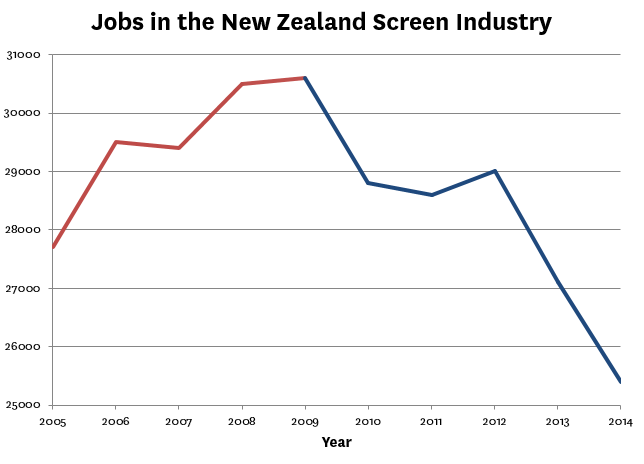